Choose us to upgrade to an intelligent camera system that enables prompt intervention!

Regular video surveillance systems – mostly designed for recording only – are slowly being phased out.
The path of development naturally leads towards the processing of current/real time events (or even the prediction of future situations!) rather than just recording past events.

The aim of intelligent technology is to react promptly based on the preset program. When these cameras “detect” an event that needs human intervention, they trigger an alarm. In such cases, they “present” a description of the event and also the underlying short video clip to the operator. The alarm and the video of the event stays on the operator’s screen until it is acknowledged, and it remains available for future reference.

The system can be equipped with an intelligent temporary recording device that stores the records of the predefined highlighted events in high resolution and original quality for a few days. (Of course, the records remain available in a compressed format on the file server, on NVR or DVR for a longer time, independent of the temporary storage device.)
The self-learning algorithm “gets used to” the environment in which it is used: it “learns” regular events (such as people just passing along a corridor), and whenever it detects an irregular event (i.e. someone stops in the corridor and stays in one place for a longer time), it sets off an alarm or performs any other pre-programmed tasks.

When deploying a new camera system, it is advisable to install intelligent cameras in order to make full use of the intelligent video surveillance system’s capabilities but the solutions offered by our company can be effectively applied in existing camera systems as well. 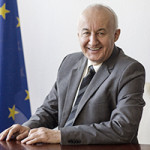 Should you have any further comments or questions, please call our expert István Kincs on the following number +36 1 368 2002.